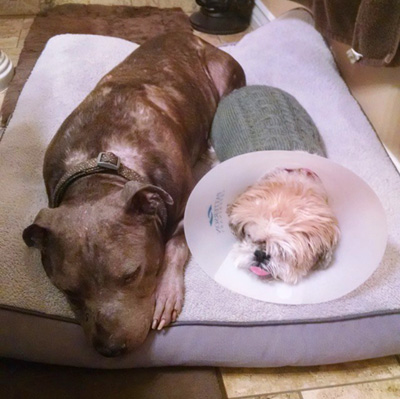 Now that I have almost two years of fostering experience under my belt I’ve come to realize that I don’t want to foster the “perfect dog”. There is no room here for that kind of dog in my house. You know, the pretty one who doesn’t bark that everyone likes. You know the dog that gets along with every dog that just happened to be dumped at the pound only because their previous owner sucked. Those dogs are not welcome here. Those dogs need to be at a no-kill shelter because that’s where they belong. Those are the dogs that get adopted before you can post their picture on social media.

I’ve taken in my share of medical cases and while most of the time they’ve never had to spend a day at the rescue, as soon as their condition became manageable they’ve either been adopted, gone to another foster or ended up back at the rescue; giving them their best possible chance at being adopted. And it’s not because I don’t want them here or their time is up. It’s because this is about doing what’s best for them. This part of fostering will never get easy for me but as I’ve stated before, this is not about me. If that was the case, Jude and Ziggy would still be here! And Jude and Ziggy are in the best possible homes they could be in! 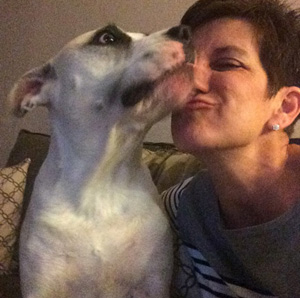 And then there are the behavior cases, the Fletcher’s, Lucy’s and the Kurtis’s. Yes, Kurtis fell into both. His attitude was very apparent even when he was ill. And when he got better, he was a lot harder to place than most people realized. The behavior cases need fosters more than anyone. And no, I’m not bringing them in here because I claim to be some kind of “dog whisperer”. I’m buying them time. I’m giving them a place to decompress. I can preach about the “energy” in my house all I want but I’m not here to fix these dogs. I’m showing these dogs that they can trust humans again and not so much make them better, for a family, but to find the family that is best for them. Stress is our biggest enemy. None of us react the same to situations when we’re stressed and the same goes for animals. You see, these behavior cases would be put down anywhere else.

Even though, a dog may be in a no-kill rescue, it does not mean they will do well in that environment. Stressed out dogs sometimes end up biting a volunteer or getting adopted out to a family who may not be ready for this dog and then the dog is returned. Fostering gives the dog a chance. Like I said, it buys them time. And at the end of the day, there is no time limit to how long they can stay with me. It takes as long as it takes but when they’re ready, so am I. I have to be. Adopting out dogs 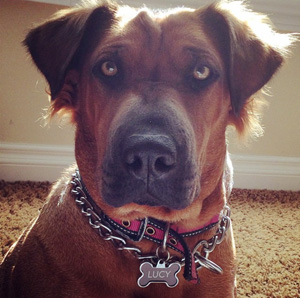 isn’t just about the dog. It’s about having faith in the human race again. It’s about believing that there are good people out there that will take a once “unadoptable” dog into their home because that dog is perfect for them.

So after all the broken crates, chewed up floors, leash aggression, howling, barking and crying that these dogs sometimes do here, I would rather be uncomfortable for a few days than have a dog be put down…especially when I know I could’ve helped that dog. Because eventually they stop being stressed and just become dogs. I’ve said it before and I will say it again, there is no magic in patience. I’m lucky enough to have dogs in my pack that understand what’s going on and I have the best support system with the other volunteers at Priceless Pets. I know I can’t save them all but I can save a few. I do not believe I have a gift because if I did, I wouldn’t have bite marks on me and I wouldn’t have “mini meltdowns” when I’m by myself wondering if I’ve gotten in over my head with some of these dogs. Like I said, I’m just keeping them safe and buying them time so they can relax and I can help animal rescues find them their perfect family. And if somewhere along the way they learn some manners and a few things from me, then that’s just the cherry on the sundae! 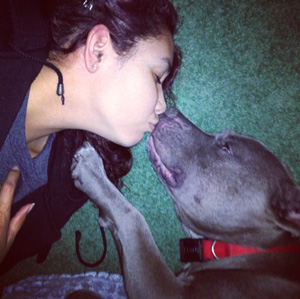 So to all of you out there who take the bottle fed babies who need to be fed every 3 hours, who take the dogs with disabilities, who take the strays in without second guessing what they may have gone through and to those who take the problem dogs, I have nothing but respect for you. And to everyone out there that’s been doing this way longer than I have and have taken the time to teach me, you have no idea how much I appreciate you because I know you don’t have the time, you make the time. It’s not the easiest thing to take in a dog that nobody wants.

This isn’t about what “I” do. It’s about them. When you spend enough time with a dog you realize they will never put their needs before yours. We owe them at least that. If an animal rescue asks me to foster I dog, chances are they’re not “perfect”….and chances are, I’m going to say yes….because this is exactly what I signed up for.