Hey everyone! I know it’s been a while. I haven’t had the time to write like I have in the past but I’m back! The past 4 months I’ve been on tour with the The School of Dog Psychology as an educational partner. Linn Boyke, the founder of the school, did 6 seminars to help people learn “how to learn” to have a better relationship with their dog by “humanizing” dog psychology.

After attending his seminar, he put so many things into perspective that it changed the whole way I am with my dogs. Today, I’m going to share with you what I used to do during bath time with Fletcher and what I do now.

Since I’ve known Fletcher he’s always hated running water. In fact, when there were sprinklers he would do whatever he could to get away from them so you could imagine what bath time was like for the guy. 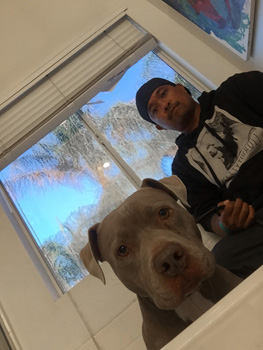 I’ve given the guy at least 12 baths and I’ve done the same thing every time. I trap him in the bathroom. Turn the water on and wait for it to get warm. Then I trap him in the corner, pick him up and put him in the tub. Poor dude is terrified and I hold him down to get him clean. As soon as he saw an opening, he would jump out and I would pin him down on the ground, pick him up and put him back in there so I could finish. I never got mad because I knew he was uncomfortable with it but I did it because he was dirty and needed a bath. There was only one problem…he didn’t know that!

You see, dogs don’t speak or understand English. I can’t tell him, “Hey Fletch, I know you hate baths but I really need you to be clean because your skin is sensitive and also because you smell.” And he can’t reply back, “I understand but can you take your time with me, those things freak me out and nobody has taken the time to show me that nothing is going to happen to me if I get in that tub.”

The thing is, he does tell me that. But since he can’t talk, he runs, he resists, he pins himself on the floor 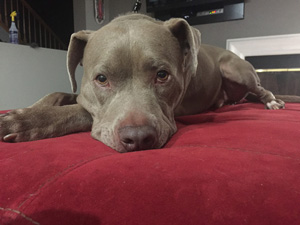 and his face and eyes get red. No, he’s not growling at me or trying to bite me but that doesn’t matter. When people get scared some of us fight, some of us run, and some of us freeze. Fletcher does 2 out of the 3. And maybe one day he may feel like he has to resort to fighting because the other two things he’s been doing hasn’t been working. And every time I don’t take the time to show him what I’m doing AND what I want from him, it gets worse and worse. Yeah he’s clean but mentally he’s a mess….and I’m the one making him like that.

So after this last seminar, I decided to do something different.

This time, I put him on a leash and I guided him into the tub. At first, he resisted but I just waited. After about 5 minutes he slowly climbed into the tub. Keep in mind there is no water running during this time. After he climbed in the tub I just sat there and waited for him to relax. I didn’t say a word. I didn’t tell him “good boy” or anything like that. I’m not going to spend all this time getting him to relax only to ruin it all by celebrating it in that moment. So after another 5 minutes, he sat in the tub. So I got up and we got out of the tub. I repeated this process until he was just jumping in there with no hesitation.

I turned the water on. As soon as he heard it he tried to bolt but since I had his leash on he couldn’t go 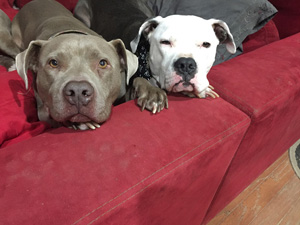 far. I didn’t pull him to me but I didn’t let him run either. Again, I never said a word to him. And again, I waited for him to relax until the sound of the water no longer was freaking him out. After about another 10 minutes I repeated step 1 but with the water running. As soon as he got comfortable in the tub I turned the water off and I guided him out.

I repeated steps 1 and 2 until he was completely comfortable.

I washed him. By this time, he was in such a relaxed state of mind he stopped resisting and he had the most relaxing bath he’s probably ever had in the 5 years he’s been alive. You see, it wasn’t the actual bath he was scared of, it was what I was doing leading up to the bath that freaked him out.

I know some of you are thinking you don’t have time to do all that with your dog but the day you decided to get a dog you also took on a responsibility. You see, I knew Fletcher hated baths and for the past year that I’ve had him I’ve done nothing to show him that it wasn’t going to hurt him because the bath was more important than his state of mind. No, I didn’t have bad intentions but I was confusing the poor guy but it was coming from a good place. Great for me but no so much for him 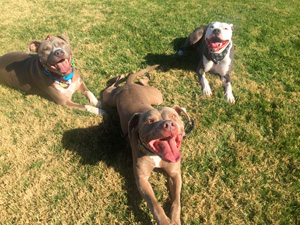 And the other point is, doing the bath the new way took just about as much time as the old way except this time I didn’t have to chase him around the bathroom, pick him up, put him back in and then clean the whole room because it was soaked.

I have one dog who loves his baths and his name is Elvis. He jumps in the bath before I’m even ready for him! The rest of them hate it and I’ve done nothing to show them they have no reason to…until now.

After I was done with Fletcher, I did the same with Penny and I was able to wash her without worrying about her bolting.

I will be writing a bigger piece on Linn and the School of Dog Psychology (www.schoolofdogpsychology.com) but I wanted to share this with all of you because most of us have a dog like Fletcher.

I can’t thank Linn enough for what he’s shown me over the past 4 months but I know I’m thanking him in my own way every time I take the time to make my dogs understand what I’m asking of them instead of just making them do it.

“It doesn’t matter how long it takes. What matters is that you take the time.”